Kameizumi Shuzo brewery has been established since 1897 on Shikoku Island, the smallest of the four main islands of Japanese archipelago. In this warm and picturesque locality of Tosa, Kochi Prefecture, between mountains and ocean, producing sake is no an easy task. The region is hot and humid, conditions that are not really optimal. Setting up a brewery therefore requires considerable work and in-depth knowledge of fermentation techniques. A challenge that Kameizumi Shuzo's small team took up with panache. 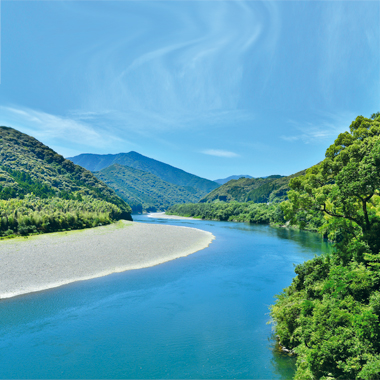 Five people who produce there premium sakes in low volumes, ranging from dry Junmaï to Daïginjo full of fruit and freshness. A particular work has been carried out with the use of a yeast strain called "CEL-24", created by the local association of sake producers. By sticking to the use of traditional methods, Kameizumi Shuzo brewery is quietly establishing its reputation well outside the prefecture limits. A great success when we know that the sake of the region had until then been consumed mainly on the spot.

Kameizumi Shuzo is installed in the Tosa region, at the southern point of the smallest of the four main Japanese islands, the island of Shikoku. This region is rather hot and thus it is difficult to produce sake without great technical knowledge. The brewery has mastered the use of different yeasts, multiplying combinations in order to achieve ever better sakes. Kameizumi Shuzo is famous for the creation of many yeast strains in the CEL series, including the exceptional CEL24, which is used in the production of their magnificent Daïginjo. <p style="text-align: justify;">Still on the use of local yeast from Kochi, CEL-19, this time combined with KA-1 from Kumamoto. Here is the exceptional vintage of Kameizumi Shuzo. The nose is fruity, elegant, with notes of apples. In the mouth, a beautiful acidity and a perfect balance. A discreet sake of beauty, supple and super clean on the finish.<br /><br /><strong>The elite of Kameizumi Shuzo.</strong><br /><br /><span style="color: #9b9b9b;">亀泉 純米大吟醸原酒 亀泉酒造（高知県）<br />72cl - alc. 16% vol.</span></p> <p>Maekake is the traditional apron of the sake brewers, and each brewery has his own. Always blue in color, this tradition is five times secular. Here is the one from Tatsuma Honke brewery in the locality of Hyogo. <br /><br /><span style="color: #9b9b9b;">The elegant Maekake of the Tastuma Honke brewery.</span></p>