We are going to discover awamori. This traditional Okinawan distilled beverage is still little known outside of its region of origin. It is produced from fermented rice and distilled to an alcohol content of 30 to 60%. It appeared in the archipelago about 600 years ago, when stills from the Middle East reached the area via Taiwan, Thailand and Indonesia for the southern part, and via China and Korea for the northern part. 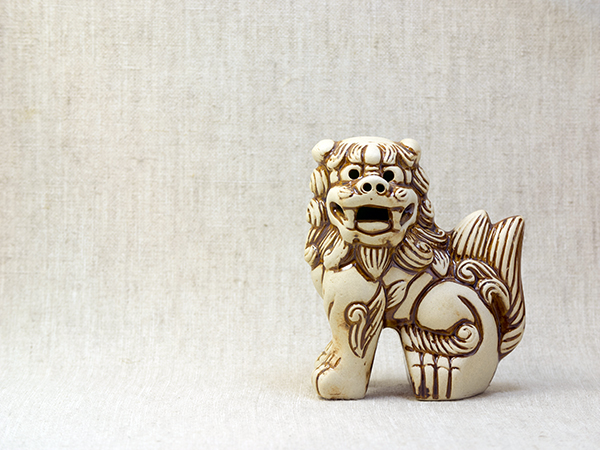 The Shisa is an imaginary animal, emblem of Okinawa.

Okinawa and the surrounding islands formed the independent kingdom of "Ryukyu", a link between the Empire of the Rising Sun and continental China, until it became part of Japan in 1879. It is from Okinawa that the stills will spread to the whole country, accompanied as it should be by the distillation specialists of the time.

Awamori is the oldest distillate in Japan with a history of six centuries.

But first, the Koji

As with sake, the rice is inoculated with the koji-kin fungus, a preliminary step to fermentation. This is a black koji, or "kuro koji", a strain of aspergillus that is perfect for the region because it is particularly resistant to high temperatures and a humid environment. This strain was discovered in this microcosm and has been given the scientific name "Aspergillus awamori". Its use has spread throughout the locality, even to the island of Kyushu where it is used for the production of certain shochus. 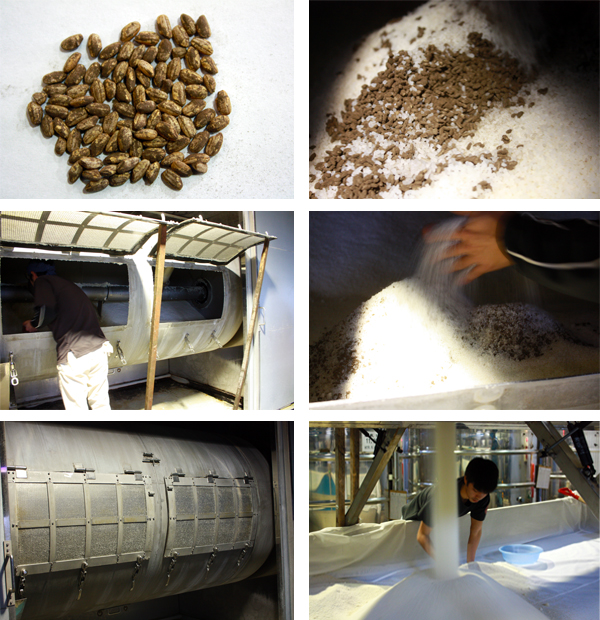 The kuro koji or Aspergillus awamori is a unique strain of koji discovered in Okinawa.

At this stage, the other particularity of the koji is that the entire rice is sown, which the producers call "zen oji zukuru", compared to the only 20% of the rice sown for the production of sake.
(As a reminder, koji allows the transformation of rice starch macromolecules into simple sugars through a saccharification reaction. This is an essential step for these sugars to be transformed into alcohol by the yeasts during fermentation).

Then comes the fermentation
The rice-koji mixture will receive the yeasts which will ensure the transformation of the sugars into alcohol by a very efficient fermentation reaction as it brings the alcohol content to more than 20%. This efficiency is the origin of the name "awamori" which means "big bubbles" in Japanese, in relation to those observed during this phase of the production. 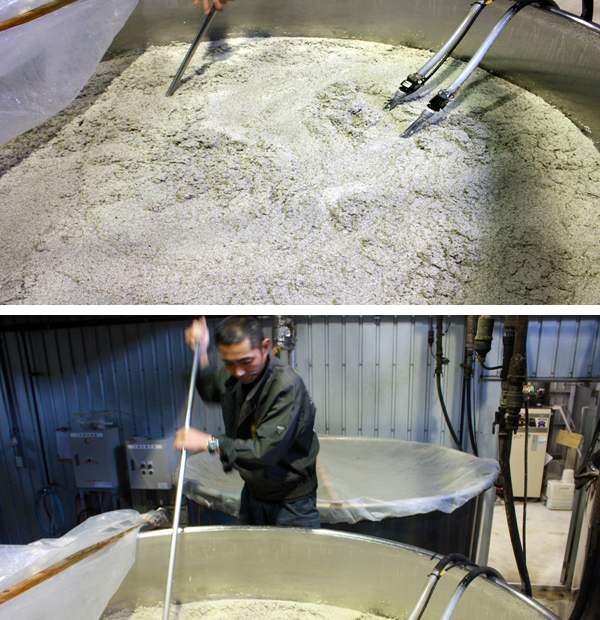 The term awamori means "big bubbles", in relation to those released during fermentation.

Then the distillation
The distillation takes place in a single pass in a traditional direct-heating still, with a result of around 65-70%. The whole is then reduced to around 30°, except for awamori for which the producers have a derogation granted by the authorities. They can then titrate more, as is the case for hanazake, produced on the island of Yonaguni, which is at 60°. 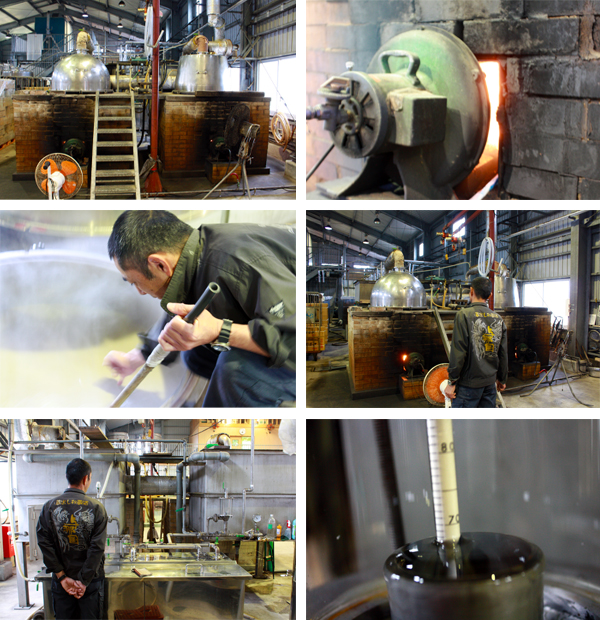 The distillation is done in a traditional direct heating still.

Hanazake is an awamori produced only on the island of Yonaguni. It is said to have originated in Taiwan where its cousin, "Corian", is a brandy whose pharmaceutical value there is not in doubt. Hanazake benefits from a derogation based on a tradition linked to funeral rites.

Traditionally, awamori is meant to be aged in earthenware jars.

Finally, the maturation
Awamori will be aged in vats and then in earthen jars, called "kame". The ageing process takes at least three years and to obtain "Ku-su". Aging is a tradition in Okinawa and the reactions that occur in these jars will really change the flavours of the awamori. They will become rounder and give a softer feel. 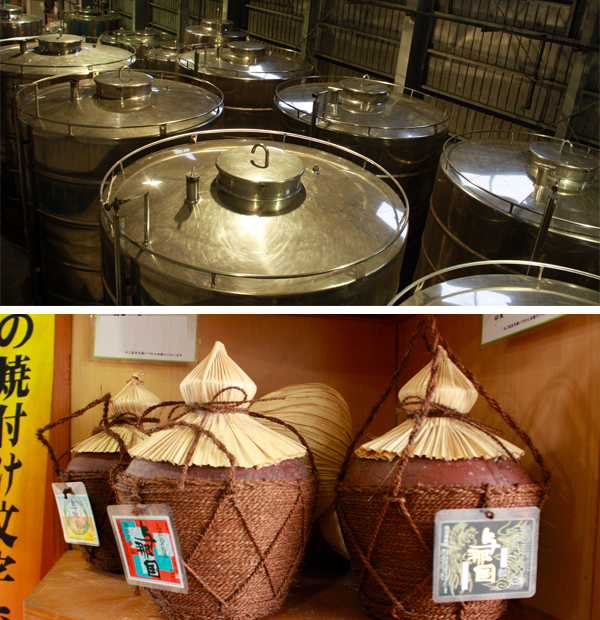 Maturation and aging in earthen jars is a very traditional thing for Awamori.

For the record, during the Second World War, the battle of Okinawa, called "Operation Iceberg", was the biggest battle of the Pacific campaign. It lasted from March to June 1945. For the American armed forces, Okinawa represented the last stage before the invasion of Japan. Many villages were completely wiped out by the intense bombing. It is said that a monumental stock of jars containing more than 400 years old awamori was destroyed, an awamori that dated back to a time when the Okinawa archipelago was still the Kingdom of Ryukyu.

The taste of awamori
Awamori is a drink with a unique style. The aromas are powerful, almost rustic, with earthy notes of undergrowth brought by the black Koji. A clean distillate, with a nice liveliness and minerality, on a pleasantly silky background.
Traditionally, Awamori is drunk as is in a ceramic or terracotta bowl, with ice, sometimes with water.

Awamori, a typical drink, a very original cocktail base.

Awamori is also a very interesting cocktail base. We were lucky enough to find the Summer Glass bar on the road to Ishigaki, which specialises in awamori cocktails. Here are some of their creations. 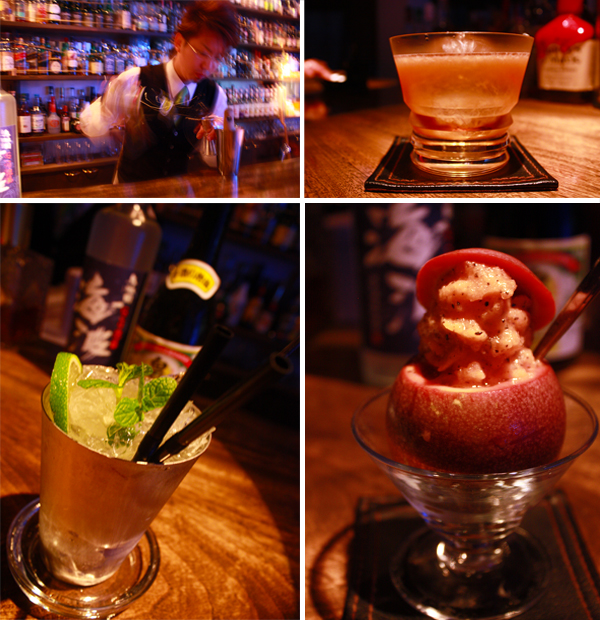 WHICH AWAMORI TO DISCOVER?
We have recently expanded our range of awamori and now have several distilleries in our catalogue. Here are four references that could be a good start. It's up to you to see which one you find most attractive!

The rustic: Zanpa Black
Zampa black is an iconic Okinawan product, the emblematic and historic product of the Higashuzo distillery. Nicknamed "Zankuro", this is a lively, clean awamori that clearly evokes the soul of Ryukyu. A guaranteed trip! 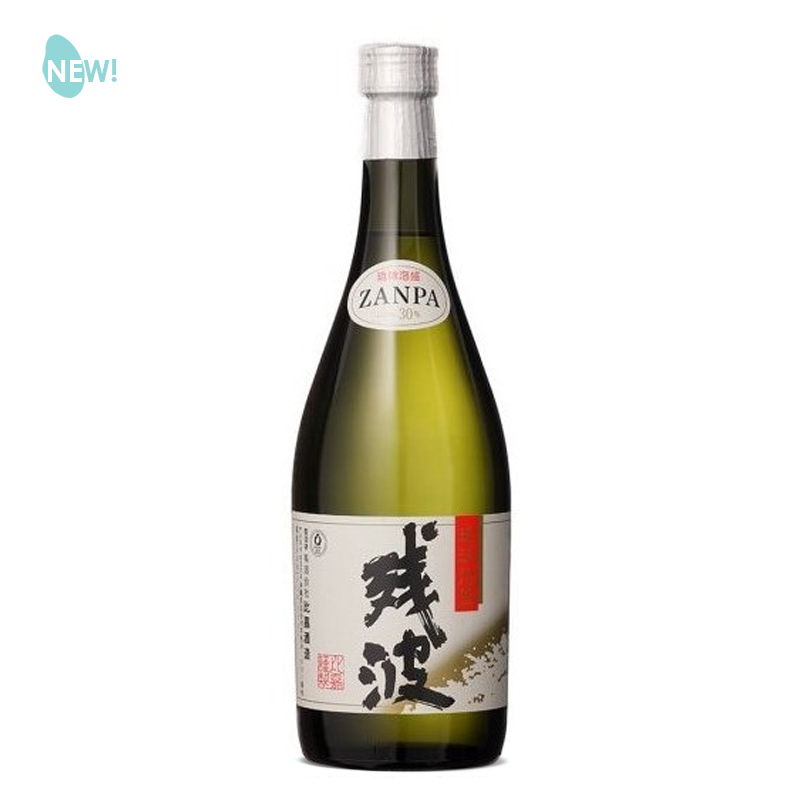 The typical: Seifuku Vintage
A 3 year old awamori in the bottle, at 43 proof. A true tasting spirit, rich, full flavours and whole because it is unpasteurised and unreduced. 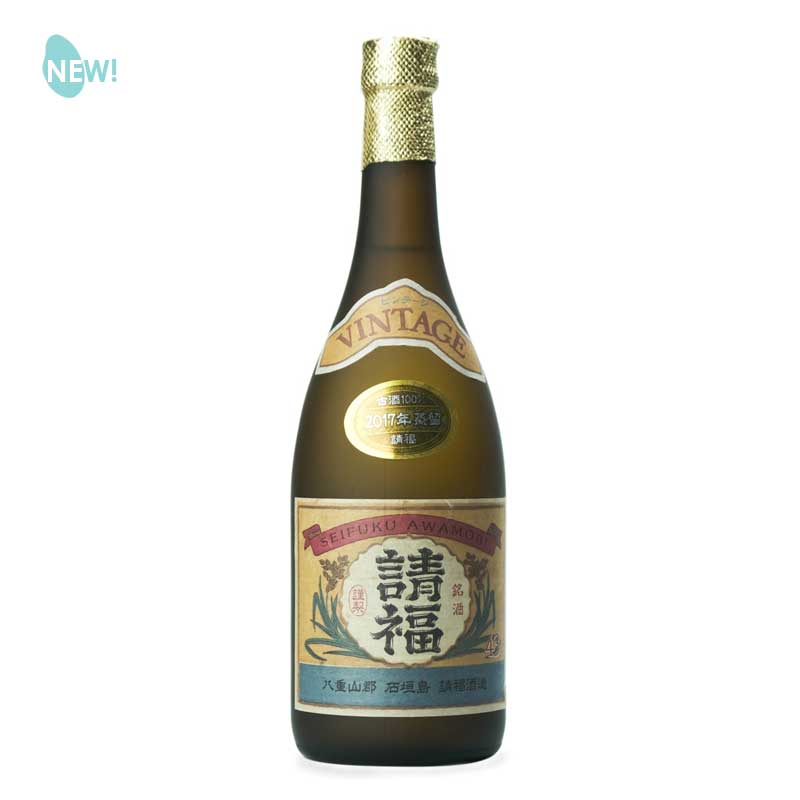 The delicate one: Uminchu
Uminshu means "fisherman" in Okinawa (umi = ocean; chu = man). This awamori is closer to light notes inspired by the scents of the ocean than to the classically rustic aromas of this drink. It is still an awamori, but with fruity, clear and refreshing notes. 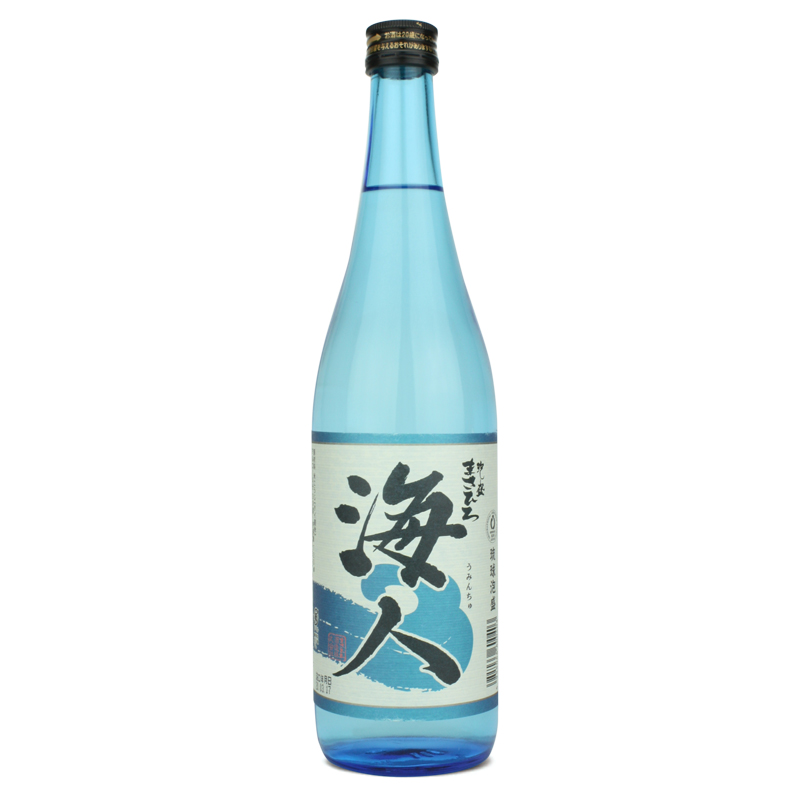 The rare one: Yonaguni Ku-su
Produced on the island of Yonaguni, located about 100 km from Taiwan, a 3 year old awamori with a fruity and delicate nose, round, with ripe fruit. The palate remains long and fresh, spicy, with complex fruity notes of pear, green apple and banana. 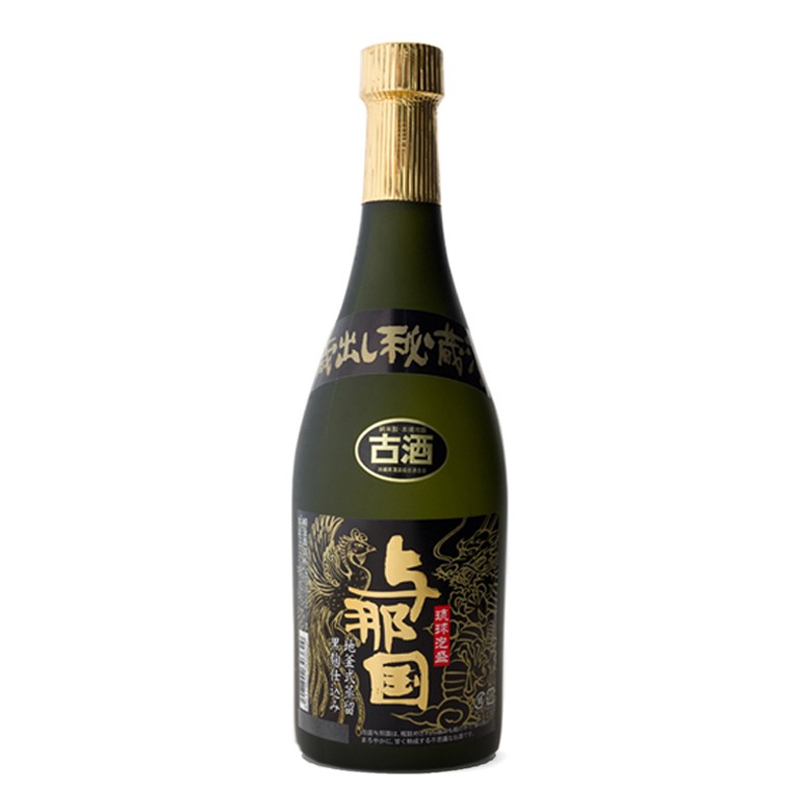 To accompany the awamori
Okinawan cuisine is based on the use of vegetables, seaweed and tropical fruits such as goya, mango, pineapple, fish such as tuna or swordfish served raw, black pork and wagyu beef, all cooked in very simple ways. This cuisine has given rise to the concept of "ishoku dougen", an idea according to which diet is closely linked to health and well-being.

And if we had to name only one typical Okinawan dish, it would certainly be goya champuru, a stir-fry of bitter cucumber, egg, tofu and vegetables. 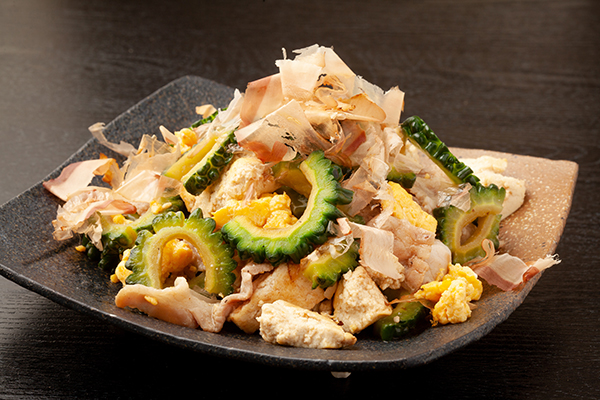 More easily (if you can't find goya at your local greengrocer's...), we recommend that you try awamori with cured ham, truffles, mushrooms, diced tuna drizzled with soy sauce, or grilled meats.

THE RECENT ISSUE
Here is a mini section that we have decided to add at the end of each newsletter. A section in which we try to briefly answer a question asked by a customer or visitor.

Is it possible to produce sake outside Japan?
Not only is it possible, but it has been done for a long time! There are dozens of sake breweries outside of Japan, particularly in the United States, some of which are large units, emanating from the most popular brands in Japan, and others of a more modest size, even experimental. In the same way, there are breweries in Asia, in China, Taiwan and the Philippines. In Europe, too, although no major brand has yet been established. Breweries have sprung up in Norway, Scotland, Spain, and of course in France, with the Brasserie du Levant in Pélussin. All these structures produce sake, but not "Nihonshu" because to be able to claim this appellation, the sake must absolutely be made in Japan, with Japanese ingredients.