We're off to Saga Prefecture, in southwestern Japan, a sake-producing region that is still little known in France, yet with some thirty active breweries and a distinctive style, it really deserves our attention! After a quick tour of the Prefecture, we will take the advice of four brewers we interviewed about the general profile of sake in Saga, as well as their own style, of course. 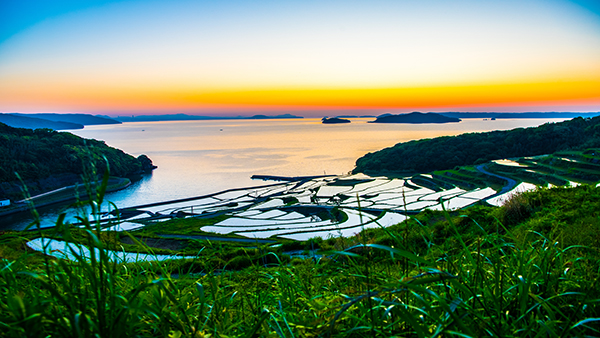 The rice terraces of Hamanoura no Tanada and Oura no Tanada are a must-see. They are among the most beautiful and peaceful places in Saga. The sunsets in spring are breathtaking.

THE PREFECTURE OF SAGA
Located nine hundred kilometers west of Tokyo, Saga is one of the eight prefectures of Kyushu Island. Its settlement would date back to more than 2000 years before our era, the region representing an ideal home for the settlement of a human community thanks to generous natural resources, a pleasant climate, and varied landscapes: the sea borders the territory to the north and south, the mountains are low and vast fertile plains are a perfect space for the development of agriculture. Today, the population is around 830,000 people, half of whom live in and around the capital and the other half in small towns and villages. Its geographical position at the western end of the Japanese territory has favored exchanges with neighboring countries, thus contributing to the development of the region. In the 16th and 17th centuries, for example, the importation of pottery techniques from Korea and China led to the appearance of the famous Arita porcelain which we mentioned in a previous article. 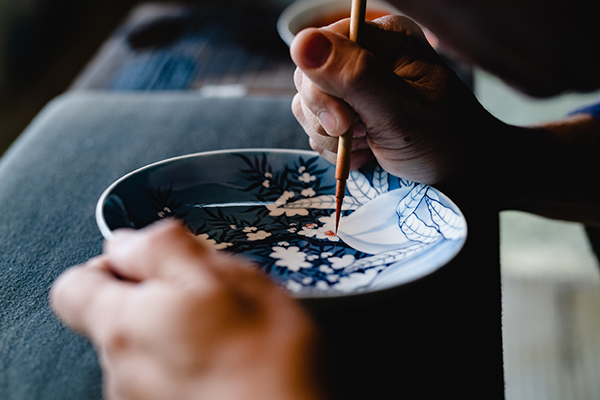 The production of Arita porcelain began in the 16th century. From the 17th century, they became known in Europe thanks to Dutch merchants.

Its geographical position at the western end of the Japanese territory favored trade with neighboring countries, contributing to the development of the region. In the 16th and 17th centuries, for example, the importation of pottery techniques from Korea and China led to the appearance of the famous Arita porcelain which we mentioned in a previous communication. The 16th century is also marked by the introduction of stills from the Middle East, via the Kingdom of Ryukyu (Okinawa). These new techniques allowed the emergence of an alcoholic beverage that today rules the island, the Shochu. But with about thirty breweries listed, Saga is considered as a major prefecture for sake production in Kyushu.

A visit to the prefecture inevitably begins with the two thousand year old site of Yoshinogari, which covers more than 40 hectares for the central village, plus 117 hectares of historical park in the surrounding area. It corresponds to the largest complex of archaeological sites of the Yayoi period. A large quantity of objects have been found there, testimony of an intense activity. 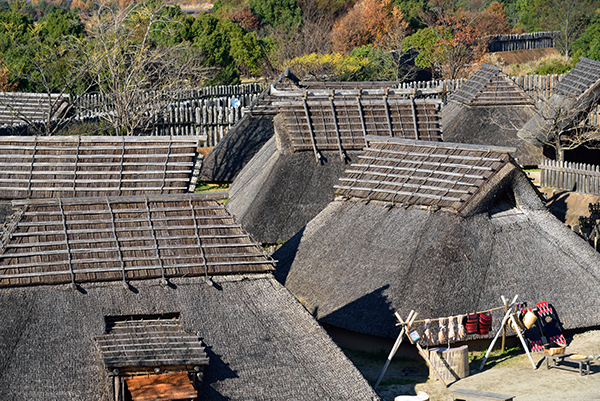 A leap in time takes us to Saga Castle. Built at the beginning of the 17th century, it is of hiraijirô style because it is built on a plain and not on a hill, and surrounded by a wall and not raised on stone foundations. The sanctuaries are also atypical and worth the detour, proof of this is the one of Ouo-Jinja and the "Kaichu Torii", the toriis in the Ariake Sea. 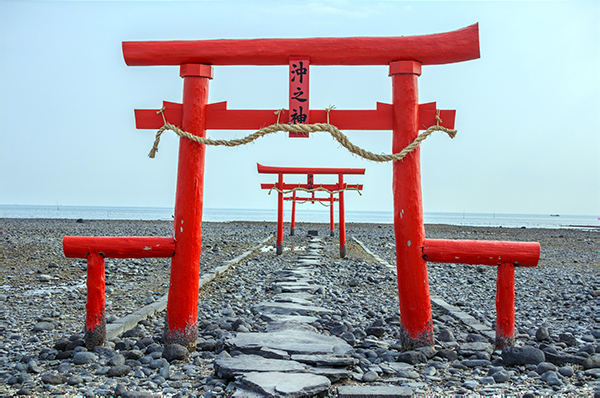 FOUR BREWERIES TO DISCOVER
We propose you to visit four craft breweries that we are happy to reference in our offer: Amabuki, Komatsu, Setou and Yano Shuzo. Here is their location in the territory of Saga Prefecture. We asked each of the producers to tell us about Saga's style and what makes it so special.
map of saga prefecture in japan with location of breweries. 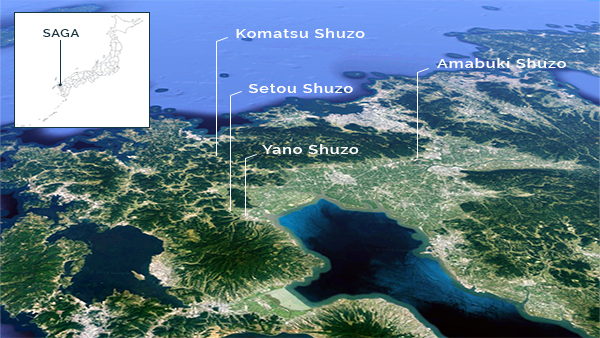 SETOU SHUZO BREWERY
It was founded under the name Maruhei Masamune at the end of the 18th century by Tajibei Setou. It was in 1920 that one of their products became ultra famous in the region: Azumacho sake, named after the Japanese Prime Minister of the time. In 1929, Azumacho became the official sake of the Imperial House of Emperor Showa. Sake of Setou Shuzo: Azumacho Junmaï - Azumacho Junmaï Ginjo

Heiji Setou, owner of Setou Shuzo
"During the Edo period, Daimyo Naomasa Nabeshima strongly encouraged agriculture. The land and climate of Saga being good, rice crops were abundant enough to feed the population, but also to generate large volumes of sake. The fact that Saga is bordered by the Ariake Sea to the south, a sea with high tidal coefficients, greatly facilitated trade by sea and allowed us to export our sake very early on. 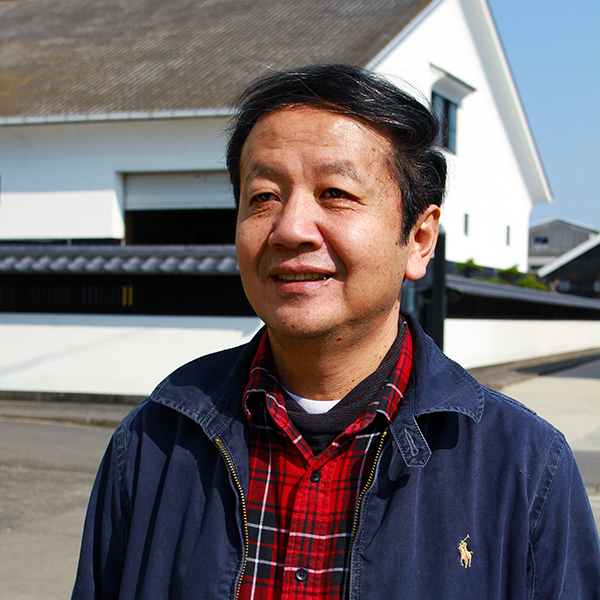 I am convinced, and some studies show it, that the inhabitants of our warmer regions prefer sweet things. This has helped to give the "Hojun Umakuchi" style to Saga sake, rich and tasty sake. We are in this trend because we produce fruity sake with a strong umami. We have an average high Kasubuaï* because we do not insist on the moromi press. This allows us to obtain tasty, rich sake with a clean finish."

(*The Kasubuaï is the proportion of Kasu (paste re rice resulting from the press), remaining after filtration, compared to the volume of the moromi. If the press is light, the Kasubuaï is high and the sake's aromas are more elegant).

YANO SHUZO BREWERY
Yano Shuzo is located in the city of Kashima, south of Saga. A micro-brewery recently taken over by the new generation, the 8th since its foundation. Their mission is to perpetuate two centuries of remarkable work, based on the search for innovative flavors and the constant improvement of sake quality. Yano Shuzo's Sake: Kurakokoro Tokubetsu Junmaï - Kuragokoro Junmaï Ginjo

M Motohide Yano, owner and Toji of Yano Shuzo
"Saga is now recognized as a sake region, but I'm not sure that sake has always been good here. I think that with the high temperatures, the rice was finally too easy to liquefy and the fermentation was not as successful as in colder regions. But this has changed a lot over time because, something rare in the sake world where everyone prefers to keep their secrets, we exchange a lot between Toji and Kurabito from the region. The goal is to improve the quality. 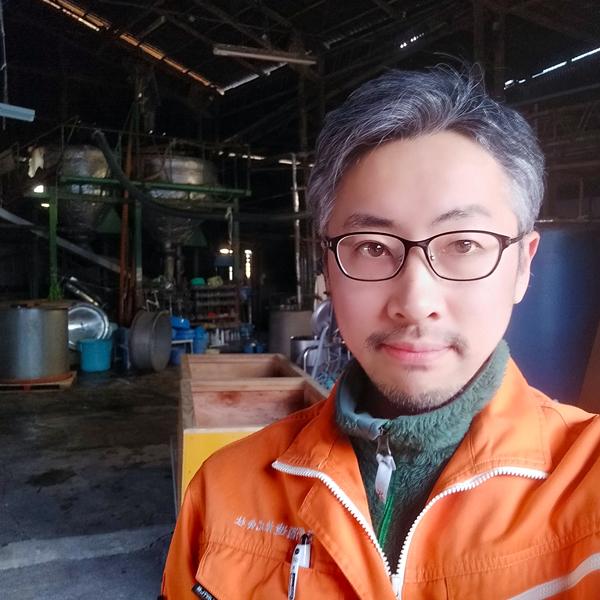 Saga sake is rich and rather amakuchi, sweet and with umami. People here like sweet things like our famous ogiyoukan, a very sweet bean cake, or lagoon fish prepared with soy sauce and sugar. To go with this kind of food, sake needs to be rich, tasty, strong. This is the style of Saga.
At the brewery, the fact that we do not have a marked cold spell during the winter allows us to conduct fermentation without interruption, which favors the production of sake with a good umami. And since these winters are dry, the koji preparations are of excellent quality. But producing sake means combining the work of men and microorganisms in the best possible conditions. In keeping with Saga's style, we give carte blanche to our employees to constantly engage in new and innovative challenges".

AMABUKI SHUZO BREWERY
It is located at the foot of Amabukiyama Mountain, hence its name. Founded during the Genroku period (1688 - 1704), it is specialized in the extraction and use of yeasts from flowers. The rice is grown exclusively in the Saga Plain and the water comes from the nearby Sefuri Mountain. Sake of Amabuki Shuzo: Amabuki Yamahai Junmai - Amabuki Kimoto Junmai Daiginjo - Amabuki Ichigo Kobo Nama

Mr. Hosokawa, owner of Amabuki Shuzo
"We are fortunate to have high quality water throughout the prefecture, thanks to the Sefuri Mountains in the North and Tara in the South. And as everyone knows, water is an essential element for the quality of sake. But what makes Saga a special region is above all its climate: temperatures here are higher than in other regions and this has a considerable impact on sake production. High temperatures allow the yeasts to work more efficiently and therefore the rice to liquefy easily. The result is sake with more umami and sweetness that corresponds to the local style. 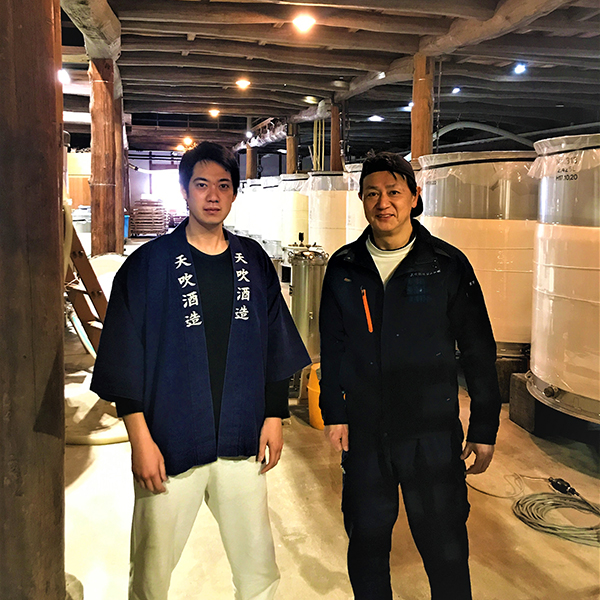 At Amabuki Shuzo, we use flower yeasts (or "hanakobo"), which allows us to obtain sake with a wide range of flavors. It is quite logical to imagine that hanakobo will lead to the expression of floral notes. That's true, but that's not all. They have the ability to give sake a wide variety of aromas, sake that meets the expectations of a wide audience, from beginners to experts. And this is what we are looking for, to bring pleasure and comfort to the greatest number. We practice Kôon-toka which is a fast way to prepare the fermentation starter, at high temperature*. It is a technical option specific to southern regions because it avoids contamination by other undesirable yeasts or bacteria and above all allows us to establish a stable and efficient population of yeasts from flowers".
(* Kôon Toka takes 5 to 7 hours at 55°C, compared to the more classical Sokujo method, about two weeks at 20°C, or 1 month for the Kimoto method).

KOMATSU SHUZO BREWERY
Founded at the end of the Edo period, Komatsu Shuzo is located northwest of Saga Prefecture. In the heart of a generous natural environment, this micro-brewery still works according to entirely artisanal methods and the volumes that come out of it are ultra-limited. Komatsu Shuzo's sake : Manrei Nozomi Junmaï Ginjo - Nomirinko

Daisuke Komatsu, owner and Toji of Komatsu Shuzo
"In Saga, the sake world is made up of young, very active and really passionate workers. We are all aware that it is important to help each other and share our knowledge to constantly improve the quality of our sake. Concerning the style of Saga sake, we are on rich, rather sweet, and tasty sake. In my opinion, it has imposed itself because it corresponds to the taste preferences of the local population and there is a historical reason for this, it's the history of sugar in Japan. You should know that during the Edo period, sugar was imported via the port of Nagasaki, which was then run by the Dutch. The Sugar Road (Nagasaki Kaido) passed through the whole Saga Prefecture before sailing to supply the capital city of Edo. The inhabitants of the region had easy access to this commodity which was then considered a luxury and forged their palaces in this context. 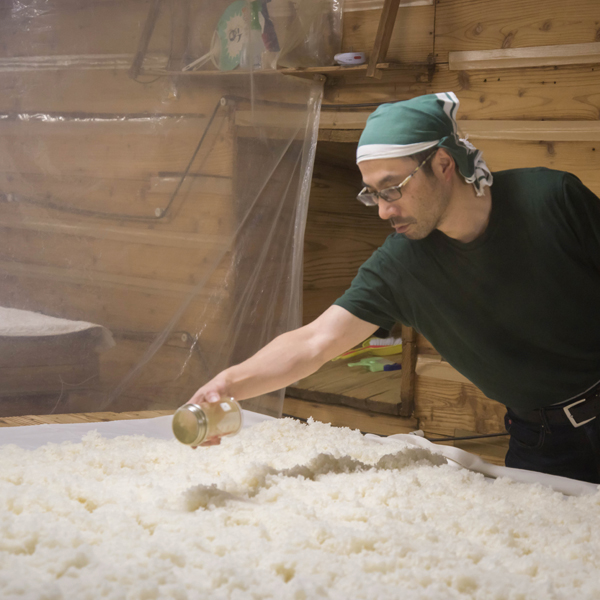 This style also corresponds to the lifestyle of the region. With a large proportion of the territory exploited for agriculture, the work is very physical for the population who, at the end of the day, find the necessary comfort in the consumption of rich, almost nourishing sake. Our style is a sake that can be drunk slowly during the meal, a sake that can be left to mature. Our sake generally has a discreet and nicely scented nose and, without this being a constraint, we try to slightly reduce the sweetness while fully retaining the aromas".